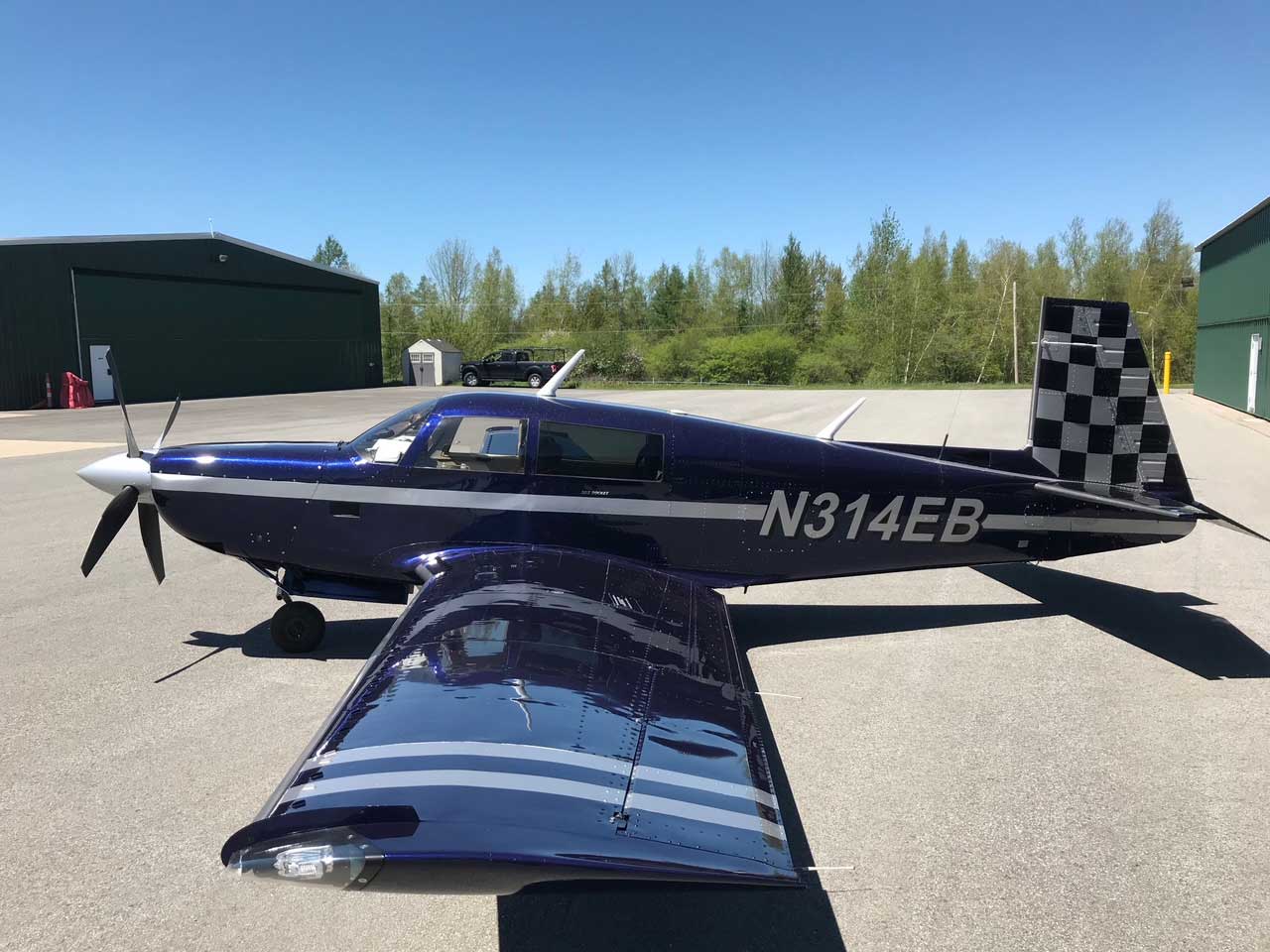 Here’s my airplane. N314EB. I have had her for a little more than 10 years. Each year a little better, in a gradual restoration, every year something. I got VGs and a P2audio system for audible English gear warning – check gear – plus a electric gyro life saver during that first annual, and new more modern gear doors that better close the front space, gap seals all the way around, and wheel well seals. About 7 or 8 years ago I got angle of attack indicator system, with voice audible warnings “getting slow” and heated probe, and indicator is on the glare shield so I can view it during landing phase with my eyes outside the cockpit down the runway.

It used to be green, a nice but somewhat tired paint job and I wanted to paint it but couldn’t decide what I wanted. I got the 4 blade MT prop about 5 or 6 years ago, with the nickle cover for durability which I highly recommend – better climb, smoother, 35 lbs lighter off the nose – so better balance – better ground clearance – as far as I know mine was the first rocket with this prop – at Oshkosh three German engineers from MT came and personally measured my airline including the white haired founding engineer, which was fun. Love it. I didn’t want it to be like everyone else’s so I pondered on it for sometime, until I saw Shelby Cobra, which is a car I loved as a teenager. Then I realized that a Mooney Rocket is a muscle-car of airplanes. And the 4 blade prop would be nicely offset by double stripes over the top. And straight stripes along the side, 90 degrees off set all the way to the tail. And stripes on the wings, A classic throw back look from the car world. Matte black checkers and silver on the tail. That color “deep blue” is “Kona”-inspired by a Ford color. Its a chameleon color – blue, or purple, or dark blue, or even almost black depending on how light hits it. And a Dupont product sparkle in the clear coat for bass-boat bling besides the metallic pearl in the paint. Kudos to Mike Vincent at Middlebury Vermont J&M aviation who did an amazing workmanship of the paint plus new windows. I got a new tail-number – as you see it now, N314EB at the time of the paint job, vanity plate for my name, EB, and N314 is… I am a mathematics professor, plus there is a tiny “pi” symbol between the 3 and the 1. You see the tks which was there when I bought it – a 1994 install which was an important part of when I was shopping. I had a reseal (plus LR Monroy tanks) done immediately before the paint since tanks were original and I didn’t want any leaks on the new paint job (about 6 years ago), work thanks to Weepnomore in Wilmar, MN. Plus while it was there in Wilnar, side panels Bruce Jaeger personally did his fantastic “interiors” system which really does give some extra space which is well appreciated as I am 6’4’’ (and the great leg room of Mooney was also a major factor when I was airplane shopping). Also while at Wilmar, Bruce recommended and subcontracted to SCS interiors in Duluth who did complete re-do of upholstery in “camel” leather and memory foam, and perforated leather holes, great lumbar support, and they even custom lengthened the seat bases a bit to support may long tights, so with my long legs I no longer feel perched on the original smaller cushion. Plus seven leather pouches all around the cabin for all the nick knacks. For avionics, over a series of annuals, and at visits to avionics shops a little bit at a time, I did a EDM830, upgraded to a Garmin GTN650, trig30 for adsb out (in 2014 I was the first at that shop), and more modern elt. Two years ago as soon as the soars airbag seatbelts were available by the new stc I purchased them from the first batch available. At the beginning if this year at mags overhaul time, I had one mag overhauled and the now available surefly electronic ignition plus the electroair button/switch. Love it – smoother, quicker start, a tad less fuel prop and easier lop. About 3 years ago, my simple painted yoke was covered in gorgeous leather by aercomfort. KFC200 is pulling strong, but next year will be the year of a pair of GI275 – I like the classic round gauge look, and I am used to them, but safety for AHARS – I will keep the rest of the six pack though since I figure why pull them out, I like the style.